Paul's poem 'Henry the Gerbil' was published in The Fringe Poetry Magazine 2021.

Published in 2020, this is a small collection of some of Paul's short work. Available here

A collection of pieces by Paul, published in 2017 and available here

Level 3 in Education and Training 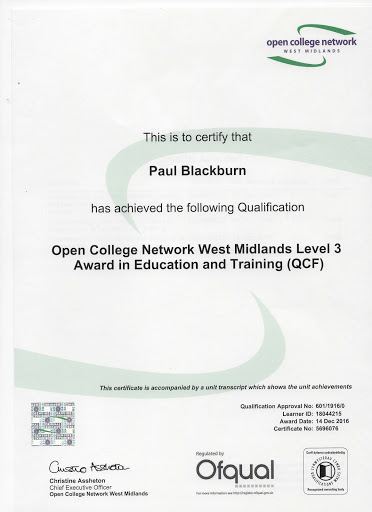 Paul's short story, "The Holiday of a Lifetime" was used in the 'Best of Bolton' event at the Octagon Theatre in November 2015.

Over the last few years Paul's work (including photographs, songs, videos as well as poems) has been published by International Times both on their facebook page and in their online magazine.

The latest work to be accepted by the ezine is Corporate Thinking- published in February 2016.

All his work for the IT ezine can be found by clicking here.

It was Dave Morgan's idea to go to Lancaster's Spotlight Club Slam in April 2014 and he also booked places in the slam. The judges obviously had some taste, though not enough to give Paul first prize, still Bolton guys 1st and 3rd was a result! Thanks to Ron and Sarah for putting on a friendly slam and a great night!

Paul was asked to write a poem in February 2014 by New York Poet, George Wallace who edits a poetry column called "Walt's Corner" published in a weekly newspaper in Whitman's home town of Huntington Long Island, called 'The Long Islander'. The paper was founded by Walt Whitman back in 1838, so there's quite a bit of history to it.
Paul wrote a poem especially for this publication call "A good life?" which George accepted and which subsequently appeared in the paper.

Whilst throughout the years his work has been accepted by many publications, recent work has appeared in: International Times, Best of Bolton, Citizen32, Mental Virus, Libertine, Scribble & Unsung.

Paul's poem, 'Doctor Curio', was a Write Out Loud poem of the month and was also that site's first audio poem

He also won the Slam Idol contest with his poem 'The policeman in my head' which you can both read and watch a video of, on this site. Details of the award and an interview with Paul about it and his poetry can be found here.

In June 2012 Paul's story 'Viking' was displayed in a flash fiction exhibition presented by Writing on the Wall at the Kuumba Imani Millenium Centre, 4 Princes Road, Liverpool, L8 1TH.

Also in June 2012 his monologue 'The Silver Dollar' was peformed in the Hippodrome Theatre, Todmorden and also appeared in a collection of monologues published by the Todmorden Amateur Operatic and Dramatic Society.

Both the Story and Monologue can be found in Stories

The Rochdale Canal Festival 2012 had a trail of poetry on every Lock from Sowerby Bridge to  Manchester during the month of August. Paul's poem, After the flood, was placed on the trail at Lock number 17.